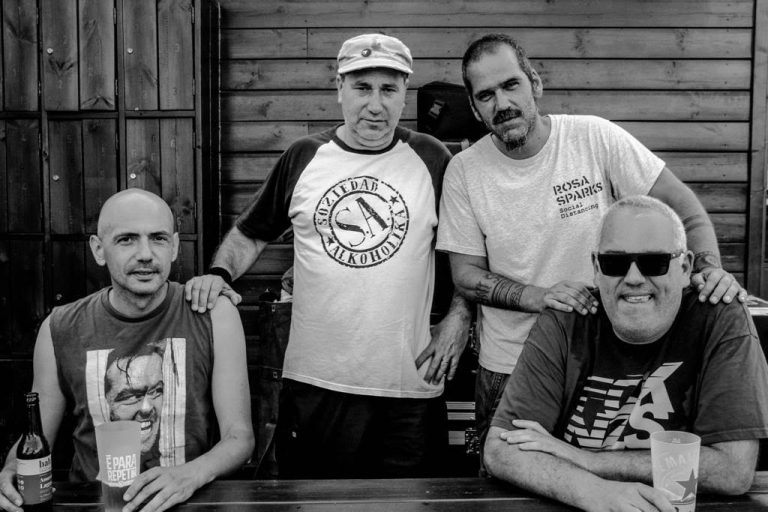 Rosa Sparks, a band from Lisbon that joins four longtime friends. The aesthetic of the group is diverse although rock ties them all together, there are also influences from various other styles: punk, hardcore, dub or even some funky and jazzy sounds, the lyrics are characterised by a militant attitude of social critic.

The name was inspired by Rosa Parks, the civil rights activist from the USA. Contemporary and partner in Martin Luther King and Malcom X’s fights, she became famous for “setting her foot down” and not yielding her seat to a white passenger on a bus in Montgomery, Alabama, when the Apartheid still prevailed, contributing to the fight for civil rights and racial equality.

Our reference and homage to her, is also in the hopes that the memory of her militancy might be the spark that inspires other Roses to rise up to the fight for our World right here and now.

For a while now, we had felt the need to join these four friends in a sincere and authentic project, but it wasn’t easy. After many failed attempts due to lack of time, we were finally able to set a date for our first rehearsal.

With some riffs, it didn’t even take 30 minutes to get this show on the road and understand that there was potential there and camaraderie amongst all of us, but what caught our attention was the amount of spontaneous ideas that came up right after our first meet-up.

The desire to create and not having any obligation to a specific style, opened the doors to a world, our world, where different musical influences from the different band mates were clear, but where they could join and combine perfectly, where — without judgements— we could go from punk to dub, just as from hardcore to funk… without limits, without barriers without frontiers…

But from the beginning there was this special care —decided even before the first rehearsal— that the lyrics of the music be social critic, focused on the world we live in and the one we’d like to live in…

In 2022 we had a alteration of the original band with the departure of the bass player Ricardo Delgado, and the entrance of another longtime friend, João San Payo, picking up the bass.

Right now, we are finishing our first album of originals, scheduled to the end of this year, until then pass by our concerts and stay tuned to news!

ROSA SPARKS at the moment consists of: