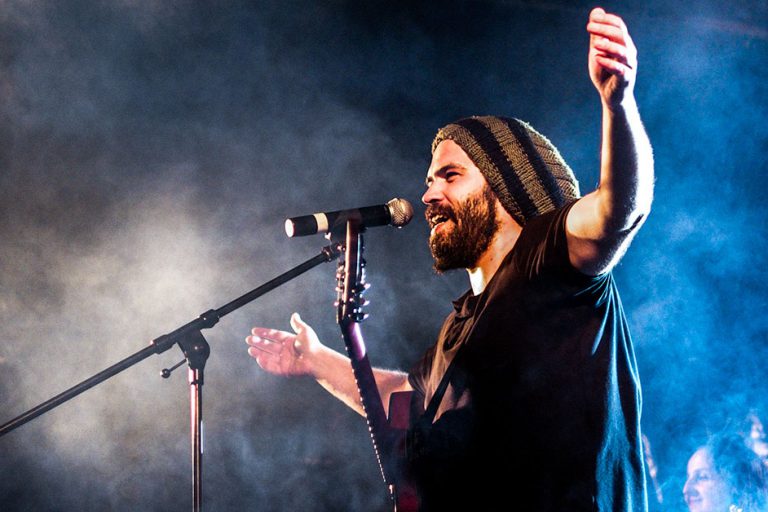 Freddy Locks is a Portuguese songwriter that loves Roots Reggae. In 2007 he had his debut album reaching #1 on Portuguese National Radio Chart and his video on high rotation on MTV. Something rare for a reggae artist.

Born on 9th December 1977, Frederico Oliveira belongs to a generation of musicians that came from Alvalade, a Lisbon city area which made history in the punk-rock music scene in Portugal. Freddy begins to play music in a punk band by the age of 17.

At that time he was committed to the anarchist and occupation movements in Spain and Portugal. In the summer of 95 he has a few experiences that changed his life, in his words:
“…In that summer I found my infinite light, the secret of positive reality. The thing that people call “god” and lives inside every living being.
This happened after I felt the many revelations in places I’ve been, people I met and… Reggae music”.

After this, Freddy starts writing his songs and playing in Lisbon’s Subway. Although his background and message was anarchist, he sounded as a reggae singer.

In 1999 he forms the band Nature and joins 20 pás 8. In both cases as a lead singer and guitar player. With these bands, Freddy plays many concerts in occupation sites and politic events, specially with 20 pás 8, which sound was described by the fans as “reggae- punk”. This band ended in 2003. In 2004, Freddy forms the band Poorman Style. They get to play supporting reggae legends “Sly & Robbie”. In the same year Freddy records his first solo album, with German reggae producer Asher G, called “Roots Rock Struggling”. This record was made with no label support, but reaches Portuguese national radio Antena 3 and the song “Wake up” was named “Song of the Year” by the Reggae Show “Radio Fazuma”.

In 2007 Freddy releases the record “Bring up the feeling” on the first indie/reggae label in Portugal called Gumalaka. This record was named the Reggae album of the year by the specialized media. It ́s single was on Antena3 playlist and reached the #1 position on this radio ́s Chart.
The video of the same song was also supported by MTV Portugal. 2008 was spent touring Portugal, playing in the two of the most important world music festivals in Casa da Música in Porto and MED Festival in Algarve, and introducing new musicians to his band, The Groove Missions.

2009 was a very positive year for Freddy Locks & The Groove Missions, in February they had a memorial concert in Porto opening for Jamaican roots band “The Gladiators” and ended in November to make 2 concerts with “The Congos”, also a historical roots reggae band from Jamaica. In August Freddy made a concert in the biggest music festival in Portugal “Sudoeste summer festival”.

The album “Seek your Truth” was released in April 2010 for Portugal and with digital edition support by Dubmatix. Growing very slowly Freddy’s solo career reaches a new level with this new album, from the recording and sound quality to the message, “Seek Your Truth” is the image of almost 15 years of learning and working the details to do really magical reggae music. Touring Portugal and having radio support from national radios “TSF”, “Radar” & “Oxigénio”, Freddy continues spreading his melodic & spiritual reggae.

2011 Feddy was touring Portugal and had 2 important shows which were to play on same stage with reggae legends “The Congos” and “The Abyssinians“ in a memorial concert in Abril and in June he played in the “Sumol Summer fest” in Ericeira, sharing the stage with names like “Alborosie”, “Fat Freddy’s Drop”, “Nneka” and “S.O.J.A”.

The album “Rootstation”, was released in 2012. This album is a new step for Freddy’s career, as he took the production the album and shows his acoustic side as well as “Dancehall DJ”. On the tour of this album Freddy played many concerts including his return to “Sudoeste Summer Festivel” where he played on a memorial night sharing the stage with Cornel Campbell, The congos, Max Romeo and Lee Scratch Perry.

2013 Freddy was touring Portugal and could share the stage with “Dubtonic Kru” From Jamaica at festival “Surf at Night”.

In 2014 when celebrating the 10th anniversary of the release of “Rootsrockstruggeling” album, wich marks the beginning of Freddy Locks career, the book “Human-Together- Arise”(http://www.apaxiuta.com/new-page/) was made by photographer André Paxiuta.

In 2016 Freddy releases single “In This Time”, a song produced by “Dubmatix”.

2018 is the year for the upcoming album “Overstand” which will show the high professional level of the music of Freddy with he album being mastered by Dubmatix and the sound and feeling will surelly move the heart of any reggae lover… be prepared for this timeless roots and spiritual life experience.