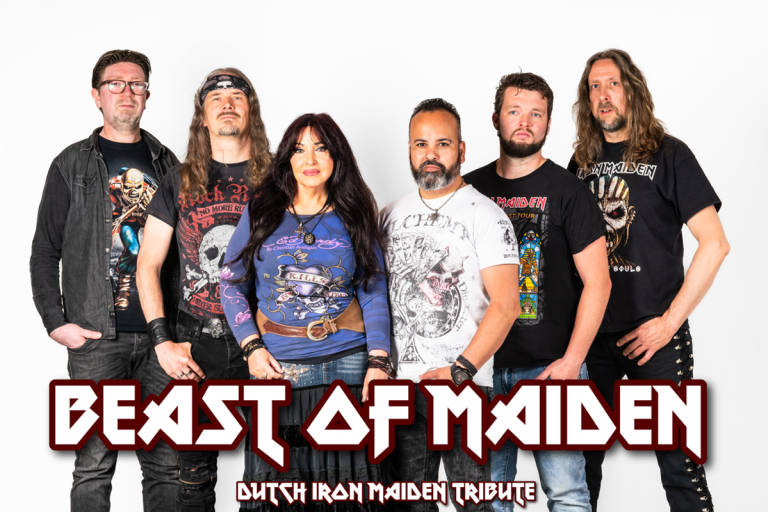 Beast of Maiden consists of 6 seasoned musicians who have earned their spurs in the live circuit, both in the Netherlands and abroad. Their shared passion for the music, style, andatmosphere of Iron Maiden made them decide to pay theultimate tribute to their heroes: the formation of an Iron Maiden Tribute Band!

A beastly good singer and frontwoman! With a power andcharisma that blows away any audience, she is absolutely on par with the legendary Iron Maiden singer Bruce Dickinson. Katja has British roots and has worked as a professional singerin America and elsewhere with many greats!

Iron Maiden demands the utmost from a drummer but Mauricio can handle the task of Nicko McBrain like no other! He has a lot of professional experience in many bands in different styles but his passion really lies with Heavy Metal and Iron Maiden in particular. Together with the bass playerhe is the roaring engine of Beast of Maiden!

Perhaps the toughest job in the band, matching thephenomenal playing of bassist Steve Harris. Where otherswould quit with smoking fingers, Ray keeps on poundingaway! Ray is also a very experienced bass player of professional class with a deep-rooted passion for all thingsRock and Metal!

Adrian Smith’s steaming solos are no problem for this highlyvirtuoso lead guitarist! During his countless performances in front of packed halls with various successful bands, Richard noticed something special: The audience invariably asked theband to play songs by Iron Maiden! Since this is alsoRichard’s favorite band, the plan to start an Iron MaidenTribute band was quickly made!

Die-hard Iron Maiden fan for as long as he can remember. The band was even the reason for Arie to learn to play guitar. Andwith success! Years later, after playing in many bands at a high level, it’s finally time to step into the shoes of guitar heroDave Murray!

Arie rocks and solo’s like an animal and together with Richard they form a mighty wall of guitar violence!

Not everyone will immediately think of synthesizers whenthey hear Iron Maiden.

Yet the keyboards of keyboardist Michael Kenny are a veryimportant part of the band! Ron also effortlessly translates therole of the third guitar to the keyboards and with his Keytar he is an integral part of the swirling show of Beast of Maiden! Ron has toured the Netherlands for years as the keyboardist of a successful cover band, but now follows his passion for Rock and the great music of Iron Maiden.