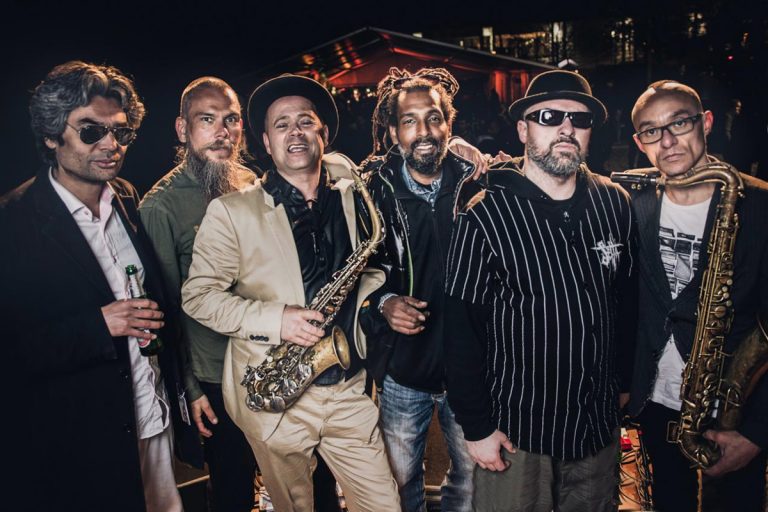 Take a crucible and pour into it a liberal amount of Ska, Jazz, Latin and Reggae music. Add a little Surf and Rock and turn up the heat. With the blend just right the result shall have the unique sound of the Amsterdam Faya AllStars. In just two and a half years their fanatic “Jamaica Jazz To The Max” has become a great success with audiences across the country, as well as Internationally. After the launch of their first EP in 2012 the following tour saw the Amsterdam Faya AllStars appearing at dates across Germany, Belgium, France and the Netherlands, including the famous ‘Lowlands’ festival, as well as those of ‘Jazz in Duketown’ and the ‘Zwarte Cross’. By a number of festivals the band were crowned as the festival-goer’s favourite. Also at legendary venues such as the Tivoli in Utrecht and more than once at Amsterdam’s Paradiso, the band has raised the roof and shaken the buildings to their foundations. Following on from this reputation the AllStars are now currently considering offers from as far and wide as Japan, Poland and Spain, and across the Atlantic in the USA.

Their debut album “All Minorities Are The Majority” is released at the end of March 2014 and begame a Akademy Award Winner in the USA as the best World Beat Album of the year 2015! The Bands founder and frontman, Remco Korporaal, is himself an absolute allstar,
with a career stretching across three decades in the international music scene. Along the way he has played alongside an impressive number of great artists, including legendary bands such as ‘The Toasters’ and ‘The Skatalites’ as well as names such as Desmond Dekker and Ziggy Marley.

His years of experience brought him to the conclusion that it was time to form a new band of his own, with a new sound. To throw a new angle onto the Ska-Reggae scene he sought out only the finest musicians from Amsterdam, each with very different backgrounds to add depth and real colour to the mix. His search proved to be a success, finding musicians, from the four corners of the world, whose diverse cultural and musical beginnings combine to create an exciting and surprising dynamic. From across the globe the band members include a bass player from Finland, an Indo horns section, a drummer from the Antilles/West Indies behind a guitarist from Uraguay alongside a concert pianist from Armenia!!

This dynamic, united in the Amsterdam Faya All Stars is an accurate reflection of the colourful mix that exists in the capital city whose name they bare, where the band is also based. A diverse meltingpot of music and culture, whose harmony has an important message for the wider world.

Present this magical formation on stage and you’ll be sure to see some fireworks! So don’t be surprised when after the show the crowd are still singing and literally crying from happiness. The essence of the Live Show owes a lot to their incredible improvisations, making each performance a unique experience.

Another great facet to the Faya AllStars ‘Live’ are the guest artists that are often welcomed to join and perform alongside them, be they Samba dancers or Hula-hooping stripteasers (see YouTube). Like the band members themselves, the shows know no boundaries.

In 2015 the band won a Akademy Award in the USA for the best Worl Beat Album 2015 and goes on tour to Japan/Korea/Germany/England/Scoland/USA/Mexico/Costa Rica/Colombia/the Netherlands/Belgium/Spain and the West-Indies…. The band looks unstoppable!