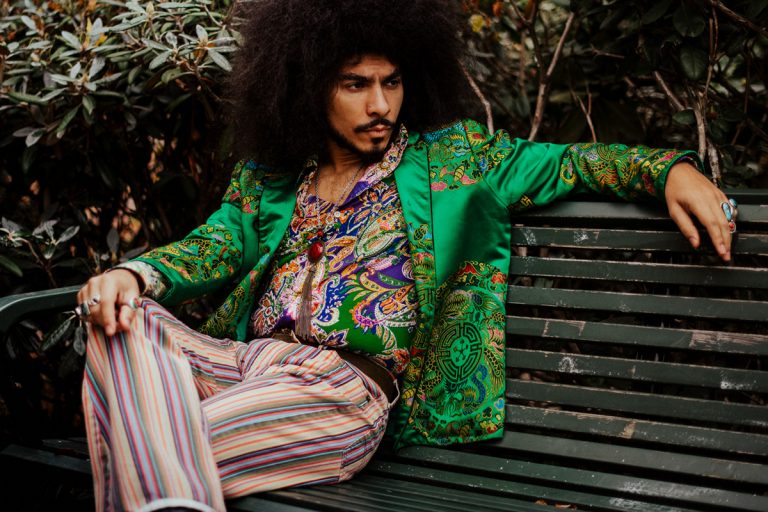 Born to Brazilian immigrants in Halifax, Nova Scotia, AfroDiziac is no stranger to the label of “The Outsider”.

Without a sense of home, always moving from place to place and never fitting in, cultural clashing began to brew what would become the beginning of an underdog’s tale.

Taught from the struggles of being in a working class family of immigrants instilled the “no fear” policy when daring to dream…and dream big. Work hard, but work smart. Maxims that roared loudly in the household of the budding artist, not yet having found his creative outlet. Music.

Music was always present in his upbringing. Exposed by his Mother and Father to the cultural music of the Brazilian martial art, “Capoeira” and the syncopated sounds of Samba, fortified AfroDiziac’s influential bond with his Brazilian roots. But whether Samba, Soul, HipHop, or blues…It was the raw and unrefined energy of Rock n’ Roll that caught his immediate attention and soon blossomed into obsession.

That obsession reached a peak after moving to The United States of America where he received his first guitar at the age of thirteen and, what began as obsessive fascination, quickly brewed an insatiable hunger.

The guitar serving as an extension of direct self expression, Rock and Roll was the catalyst guiding an inner voice compelled to speak out.

Armed with a youth performer’s permit obtained cutting classes to visit City Hall, a fifteen year old AfroDiziac targeted Manhattan’s musical landscape blazing through any venue that would book him until relocating to London, England.

Though Manhattan his primary stomping ground, Europe provided a new perspective in shaping a signature sound he calls his “Sonic Fingerprint”.

A “Sonic Fingerprint” ever present on his debut album, “Vanity Affair”.

Against all odds, AfroDiziac has defied the shortcomings of a typical “Small Town” mentality, surviving the scrutiny of being placed under the label of “The Outsider”.

Always uncompromisingly himself, it never mattered to fit in.